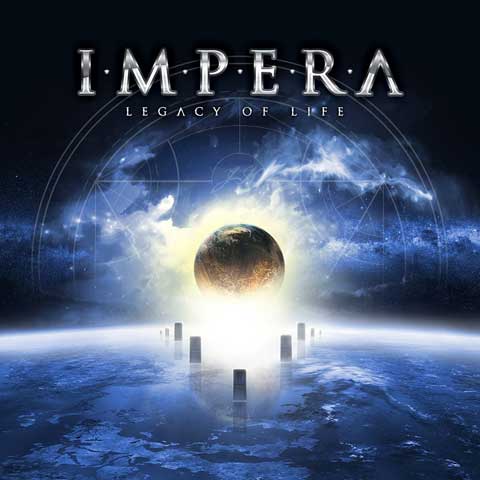 If you have taken an interest in melodic hard rock and specially the Scandivian kind, then at least a couple of the names in Impera should ring a bell. This lot hails from Sweden, but at least two of the members have international status.

The most well known member has to be guitarist Tommy Denander. Normally a session player, Denander has worked with countless of artists such as Toto and Paul Stanley and is involved in the new found career of Robin Beck and her hubby James Christian’s band House Of Lords. Lead singer Matti Alfonzetti should not need a big introduction, but for those who don’t know, he has been in bands such as Jagged Edge, Skintrade, his own Alfonzett project and has recently released an album with Red White & Blues. Bass player Mats Vassfjord is a member of both Grand Design and Laney’s Legion. Originally, though, the plan was to include former Mötley Crüe / Union singer John Corabi in this project, but due to schedules that wouldn’t mix, it didn’t work out and Alfonzetti was recruited instead. A very good choice, indeed.

But this band is the brainchild of drummer J.K. Impera (aka Johan Kihlberg). JK’s earlier activities doesn’t so much includes bands as such, more than some session work with people like Brian Robertson and Graham Bonnet, but more of a different kind. JK was the president of Kiss Army Sweden up until 1999 and I guess if you recognize his name, it’s probably from there…

It has taken JK almost 30 years to get his musical adventures started, but when he finally did, he did it with a bang. Apparently it took just one song, the album’s fantastic first single “Turn My Heart Into Stone”, with its catchy melody and Zep-riffing, to land him a record contract with English label Escape. But there’s more to this album than just that one song. “Kiss Of Death” (yes, that title has been used a million of times, but who cares!) goes into AOR territory, but with a 70′s kind of feel, “Break The Law” is an awesome melodic hard rocker that goes back to the 80′s, “Show Me The Money” has a magnificent groove and “Dead End Street” ends the album perfectly with a brilliant hook and some cool 80′s rock riffing. However, there are two tracks that stands out a bit here. The album’s only filler, in my book is “Shoot Me Down”, an up tempo rocker. It’s a good song, but unfortunately, it doesn’t stick like the rest. The other one is “Tell Me”, my favourite track on this CD. It has an infectious groove and a chorus that just won’t leave my brain. Not that I would want it to.

Production here was held by JK and Lars Chriss (Lion’s Share), who also mixed it. And the album sounds really good. When a band includes such amazing musicians, It’s really nice to be able to actually hear what they are doing. I’m also a fan of the mastering here. I love it when I can blast a CD real loud without my ears falling to pieces.

A great debut album, indeed. Musically it touches AOR territory at times, but this is pure melodic hard rock with a 70′s foundation, where the guitars speaks much louder than the keyboards and both bass and drums really pounds hard. In fact, I don’t think I have ever heard Tommy Denander, whose work mostly holds AOR, rock this hard before. Also, Anlfonzetti’s astonishing vocals isn’t at all AOR, but has more of a clean raspiness to it. All this makes for very melodic hard rock, but the cheese is nowhere to be found.

As I already stated, Impera’s record company signed them after hearing just one song and it turns out that they asked for the option for another album even before this album was finished. Isn’t it nice when quality wins? Because if I would describe this album in just one word, it would be quality!