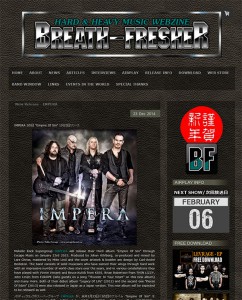 Melodic Rock Supergroup IMPERA will release their third album “Empire Of Sin” through Escape Music on January 23rd 2015. Produced by Johan Kihlberg, co-produced and mixed by Lars Chriss, mastered by Mike Lind and the cover artwork & booklet are design by Carl-André Beckston. The band consists of solid musicians who have earned their wings through hard work with an impressive number of world-class stars over the years, and in various constellations they have played with Vinnie Vincent and Bruce Kulick from KISS, Brian Robertson from THIN LIZZY, John Levén from EUROPE (who guests on a song “Thunder In Your Heart” on this new album) and many more. Both of their debut album “Legacy Of Life” (2012) and the second one “Pieces Of Eden” (2013) were also released in Japan as a Japan version. This new album will be expected to be released as well.

IMPERA “Thunder In Your Heart”