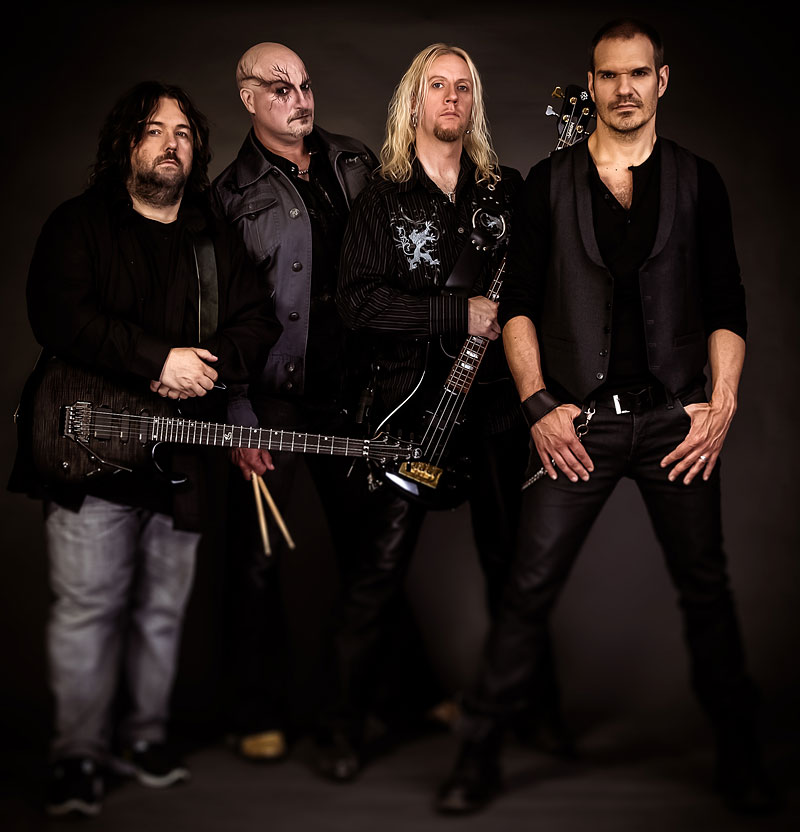 Buckle up and get ready. The band you always wanted to experience actually exists. The perfect amalgamation of everything that makes rock ‘n’ roll with the punches. You wanted the best, well you’ve got it. The whole package. A guitar player who, seemingly effortlessly, delivers stunning solos and riffs of that classic, timeless grit you thought were killed off by grunge. Pounding bass that will put you through the wall. Blistering drumming that’s as solid as it is technically challenging. And on top of all that, add a vocalist that sings circles around the competition. There’s no keyboard player, no nonsense, no fuzz – just rock and roll!

To twist things around even further, the band is the brainchild of drummer J.K Impera who acts as the commander in chief in this state of rock.

”I started the band three years ago, and originally ex-Mötley Crüe vocalist John Corabi was on board to handle vocal duties”, J.K. says. ”However, our schedules couldn’t be matched, so I opted for a good friend of mine, who also happens to be one of Sweden’s best rock vocalists ever, Matti Alfonzetti”.

The whole band consists of solid musicians who have earned their wings through hard work with an impressive number of world-class stars over the years. Their combined CV reads as a who’s who in today’s rock. In various constellations they have played with Vinnie Vincent and Bruce Kulick from KISS, Brian Robertson from THIN LIZZY, John Levén from EUROPE and many more. Guitarist Tommy Denander alone has played with almost everyone. His track record is jaw-dropping, having made solo albums with key members of TOTO and performed on albums with Michael Jackson, Paul Stanley, Alice Cooper, Ricky Martin and Celine Dion. He recently toured Japan and Europe with Joe Lynn Turner of RAINBOW/MALMSTEEN fame, Toto’s Bobby Kimball and Chicago’s Bill Champlin. He is considered one of the world’s best session players and has contributed his axe work on an unsurpassed 2000+ albums. He is honored with his own signature VGS guitar which features the innovative Evertune bridge system and True Temperament frets.

Keeping the bass at a level where earthquake sensors go haywire, Mats Vassfjord is no stranger to bands, having toured with Scaar, and Grand Design and Laney’s Legion.

Alfonzetti has been a sought-after voice for years with domestic success with Bam Bam Boys, Road To Ruin and Skintrade, as well as international stints with Red White & Blues, Scott Gorham from Thin Lizzy and british band Jagged Edge with whom he shared stages with the likes of Lita Ford, David Lee Roth, Vixen and Dan Reed. He has also taken time to record solo albums.

J.K. Impera himself can brag about having played with a number of KISS members, Graham Bonnet, John Corabi, to mention a few.

The name is Latin for “ruler”, and IMPERA rules for sure. The members share a vision: to be the greatest band in the world. No easy task, but they only have to look at their common childhood heroes – KISS – to realise that it is feasible.

”We all started to play because of KISS”, J.K states. ”We’re huge KISS-fans and collectors and even good friends with them. KISS is the reason we discovered how great rock and roll is.”

And following their tradition, you can count on a stage show that will take your breath away, complete with fireworks, smoke, fire and all hell’s breaking loose! The amount of powder used in a single show would put the defence of a small European country to shame.

In a departure from their icons, only J.K wears make-up on stage, but it’s nothing like the trademark KISS characters.

”It’s my way of showing that I’m the ruler”, J.K laughs. ”Every band needs a leader, and in this band it’s me. I’m the Yngwie in IMPERA. But that’s not to say we’re not a band – we are, and we’re here to rule the world!”

IMPERA’s style lies firmly on a classic hard rock ground with a dose of strong melodies collected from the AOR-world. All packed in a warm and punchy production by Lars Chriss of LION’S SHARE fame. Signed to UK label Escape Music, the first album Legacy Of Life will be released in October 2012 with tours to follow. ”We’re looking at a summer of festivals next year”, J.K. states.